As was mentioned in a prior post, I have a bad case of lack of creativity. This terrible problem has been going on for about three months now, and quite frankly, it's getting really tiresome. So, yesterday after a long day of working (read: watching seagulls outside and wondering what they are thinking) I decided to do some shopping on the way home. The rain was holding off, I had some extra cash in my pocket, and I actually felt like shopping for the first time in months (must be the weather). After splurging on a pair of much sought-after shades, some new jeans, and a couple shirts, I stopped in at a shoe store for some new kicks. A pair of plain white canvas shoes shouted out at me, and I had an epiphany. Canvas shoes are basically a blank canvas, so why not paint on these? It'll be fun, and give me a unique pair of shoes that no one else on this planet has!! I basically ran home, with this idea in my head, scared that if I took too long it would fade away and again I'd be unsure what to draw. So, three hours later, I present you: 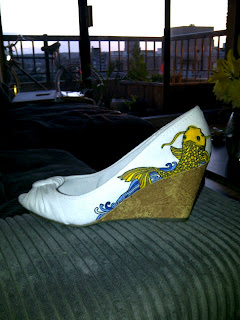 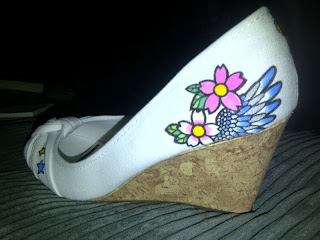 So fun! Now, we just need a little sun so I can try out these and my new shades.

Aside from this, there's really not much to report. Mexico is approaching in 13 more sleeps, and as much as I want to pack now, I think it's best to hold off for at least another week. Staring at a packed suitcase will get me too excited every morning.

In the meantime, I'm off to go ransack the local shoe store to see if I can pick up any more of these blank canvases for my feet. The options are limitless, and there are a ton of other designs I want to try out! Oh, and the sun has decided to make an appearance as we speak. I'd better get out there quick.

MissNiss
I live in beautiful Vancouver, BC, and spend most of my free time painting or cooking vegetarian dishes. I currently am involved in an art rotation around the downtown area, and hope one day to be able to live off my art alone.