About eight months ago, I was out for breakfast at the local watering hole, Score on Davie, and hanging on the wall was a beautiful bright green bike. It was like a piece of art, and I knew that I wanted it. After inquiring about it, it turned out that it was part of a fundraiser, and they were unsure about what was going to come of it. Fast forward to Thursday of last week, and a friend of mine randomly told me about a fundraiser going on at said watering hole. I decided to pop over, and sure enough, after the auctioning off of several bachelor and bachelorettes, up wheeled the piece de resistance... the green bike. Before the auctioneer even opened his mouth, I knew I had to have it. Worth $1,000, they said. Bidding started at $100. Done! Some guy across the room was trying to move in on my bike, so I upped it. So did he. So did I. This went on for several bids, until I jumped the price by a large sum, rather than the lowly $25 increments. After holding my breath for what seemed like an hour, they announce the winner. I unfortunately don't carry large sums of cash in my wallet at all times, so I had to have a quick run home, scoop some moolah, and run back to claim my beauty. I think I got it for a steal, especially since it was exactly what I was looking for in a summer bike. Here she is, pre-personalization: 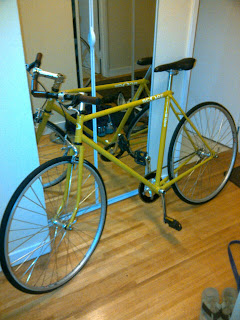 After this photo was taken, she underwent a couple of upgrades, including really nice tires, new pedals, and a really REALLY sharp seat. I can't wait for the weather to pick up so I can take her out. I still haven't named her, but I'm sure it'll come along. I hope Spokey doesn't get too jealous.
So, one more week until I'm off to the tropics of Mexico, a very VERY needed vacation!
-N
Posted by MissNiss at 12:50 PM

MissNiss
I live in beautiful Vancouver, BC, and spend most of my free time painting or cooking vegetarian dishes. I currently am involved in an art rotation around the downtown area, and hope one day to be able to live off my art alone.